Our tours in the city of the Beautiful Towers, discover with us this magical place.

For all those who wish to discover how people used to live in a tower during the Middle Ages, who were the richest merchants of the city, which frescoes were admired by the pilgrims on the Via Francigena, here is a guaranteed departure tour and at an affordable price.

One of our guides will be available every Sunday at 11:00 am in front of the San Gimignano Tourist Office in Piazza Duomo ready to help you exploring the city.

The visit starts in Piazza Duomo, continues along Via San Matteo until reaching the church of

Sant’Agostino, built in the late 13th century, with splendid Renaissance frescoes by Benozzo Gozzoli . We will then go back toward the center through a side street. The tour will end in Piazza della Cisterna.

Tickets for this tour can be bought on the spot, at only 15 € per person. 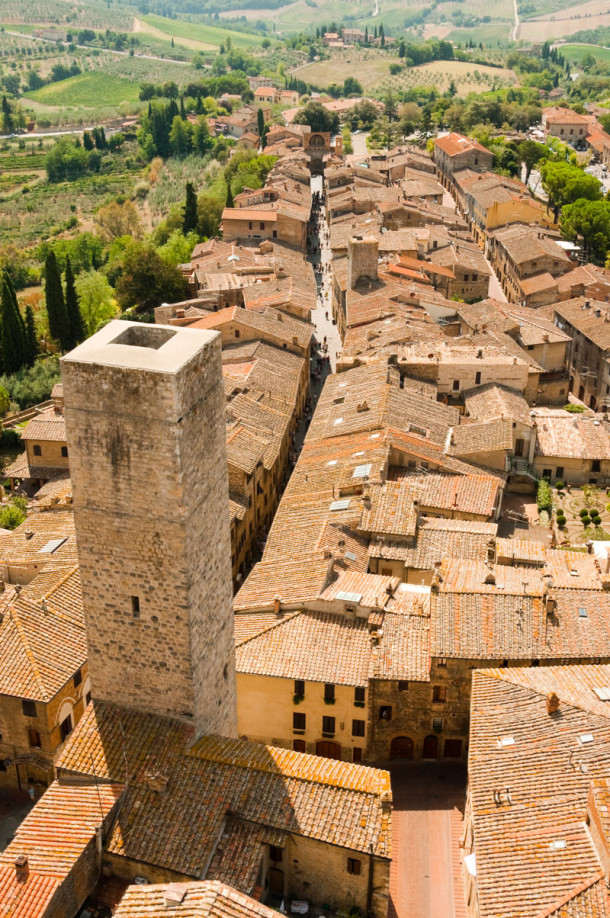 A guided tour to discover San Gimignano, a UNESCO world heritage site for its beautiful old town center with its famous towers, pratically unchanged since the Middle Ages.
San Gimignano is one of the Tuscan towns that has best retained the urban layout from the Municipal period. In our itinerary we will walk the Via Francigena, around which the first village was formed on, starting from the Porta San Giovanni to the extreme opposite one, Porta San Matteo.
While walking through, the tour will reveal the secrets of Piazza della Cisterna and Piazza del Duomo, famous for the Palaces of the Podestà and the towers of the Salvucci Family; other interesting stops of our itinerary will be the viewpoint, situated on top of the town, and the church of Sant’Agostino with frescoes by Benozzo Gozzoli. 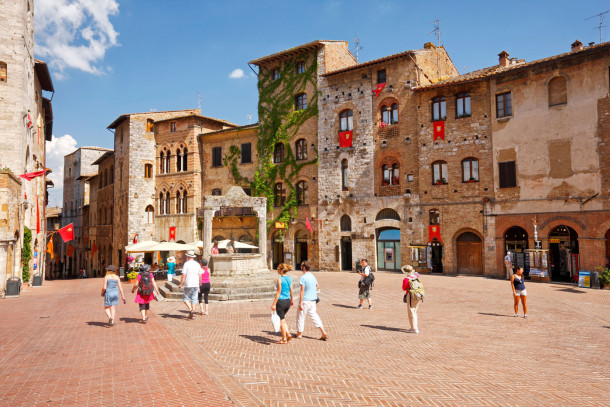 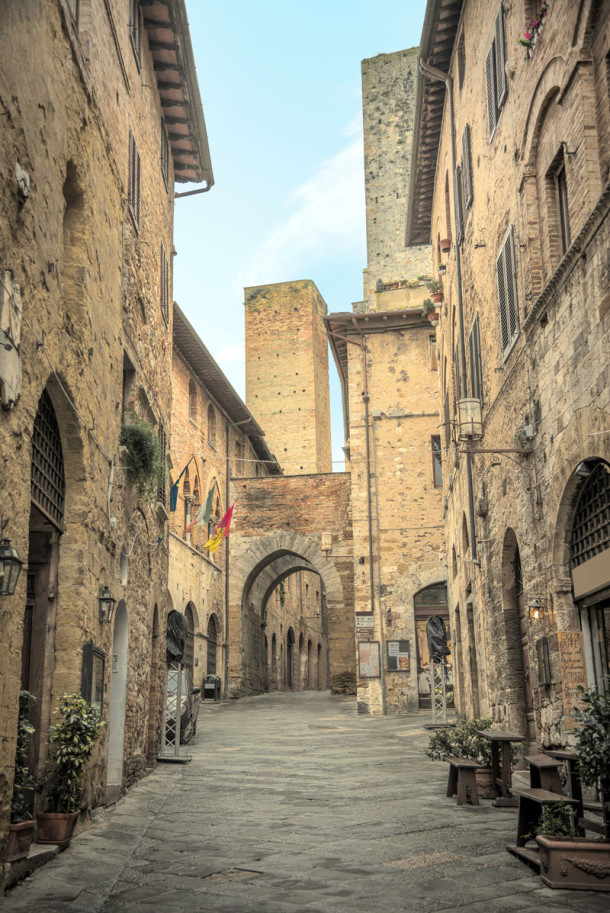 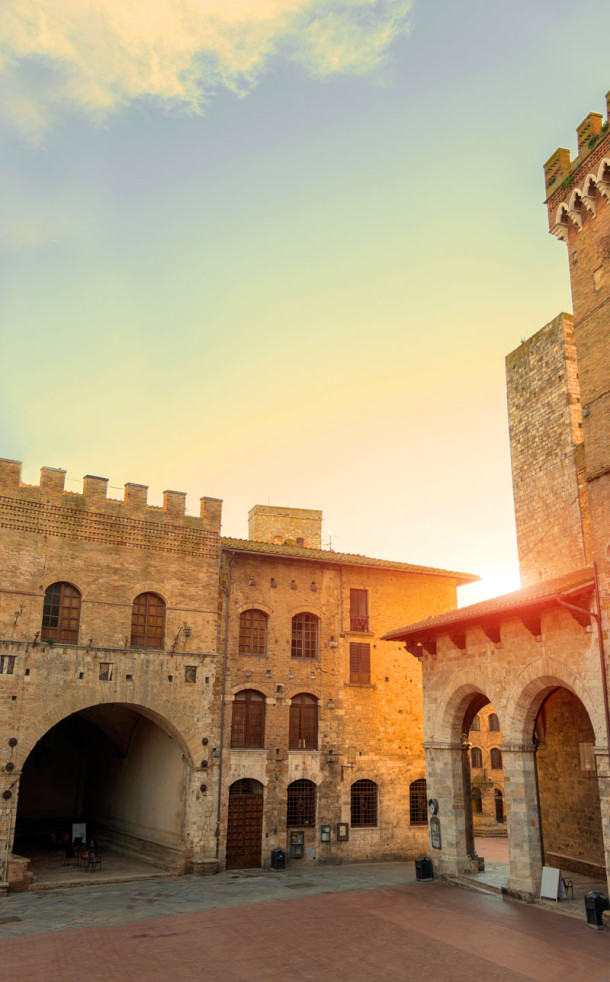 Other visits that may be added to the tours are:

Visit to the Municipal Museum. Here are preserved some valuable tables of the 13th and 14th centuries, the artworks of artists such as Coppo Marcovaldo, Benozzo Gozzoli, Filippino Lippi and Pinturicchio.

Visit to the Cathedral. The Duomo, or rather the Collegiata of San Gimignano, preservs two cycles of frescoes about the Old and the New Testament ,which are fourteenth-century works, the San Sebastiano by Benozzo Gozzoli and the chapel of Santa Fina with frescoes by Ghirlandaio.

Archaeological Museum and Pharmacy of Santa Fina. Here are preserved Etruscan finds found in the area and a collection of vases, tools, utensils and several „alborelli“ vases used in the past to preserve medicines.

Museum San Gimignano 1300. Here we can a miniature reproduction of the citiy i all ist detailes, particularly interesting for the lovers of history and urban planning. 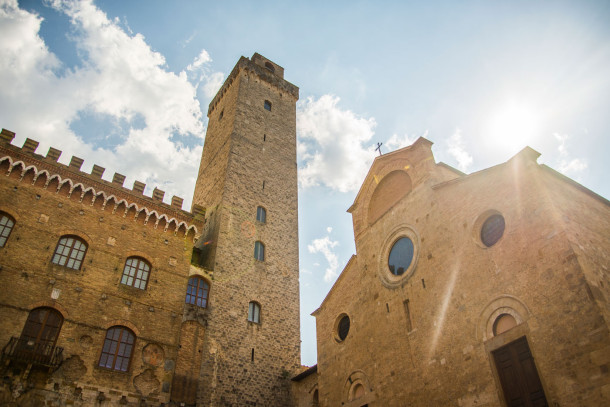 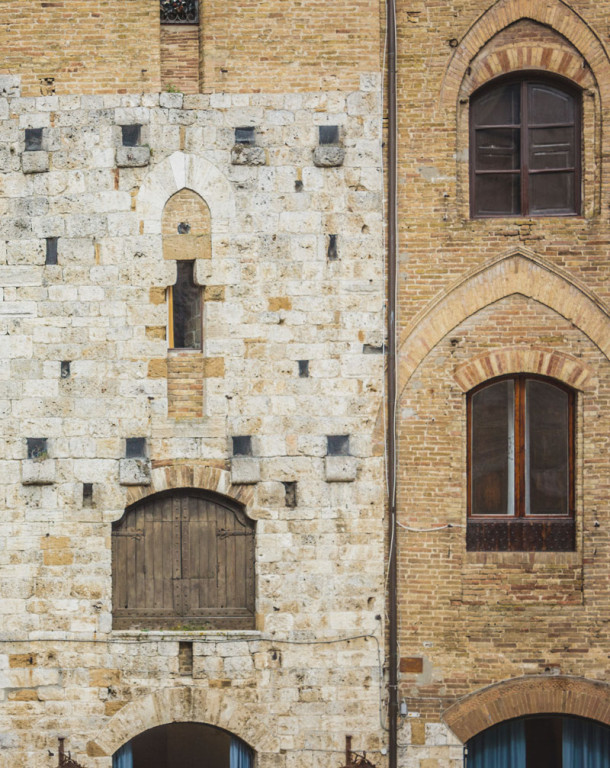 In case of large groups , in order to facilitate the arrival of the group in the city center, the start of our tour will be fixed at the bus check point Baccanella (opposite the COOP supermarket). We invite you to make arrangements directly with the guide prior. For more information do not hesitate to contact us. Please also note that if you book a group ticket for the Civic Museum you will be entitled to a discount on the check point bus fare.

During this tour we will discover together the history and characteristics of the fortress of Monteriggioni, living once again its most important and exciting moments of the past. Together, with our guides, we will be able to reach the walkway of the city’s walls and visit the museum of medieval armors.
Monteriggioni is the main border fortress built by the Sienese on the Via Francigena in the 13th century as a military outpost against Florence.
Dante himself was impressed by the huge towers that surrounded its walls and mentions them in the 21th canto of the Hell of the famous Divine Comedy.
Today it is a beautiful place for the many tourists who stop there before reaching Siena or the Via del Chianti Classico 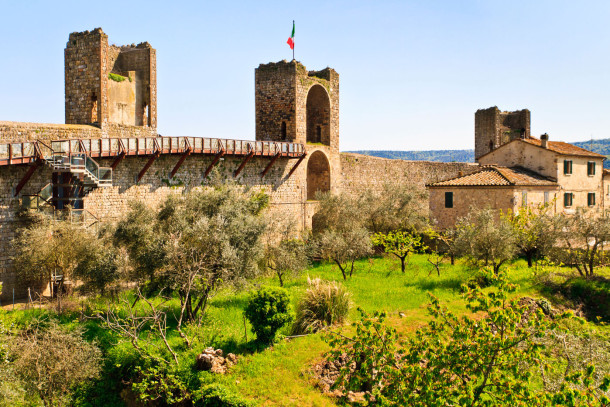 “Colle” which means “hill”, as the Tuscans call it, is a place rich of history and traditions. Our guides will take you through the most fascinating monuments of Colle Alta, the oldest and best preserved part of the town: the Palazzo Campana, the Sapia’s Bastion, the Via delle Volte, the Cathedral dedicated to the Santi Alberto and Marziale where the relic of the Holy Nail is preserved, the Pieve di Santa Maria in Canonica and the Tower of Arnolfo.

Upon request, you may add to the guided tour:

Visit to the Museum of Lead-Crystal Glass, craft for which the Colle’s artisans are masters with no match since the Middle Ages, and a visit to one of the factories that still in our days works the glass combining technology and tradition.

Visit to the Museum of Arte Sacra. The museum houses a valuable collection of gold-ground paintings and the Tesoro di Galognano, a rare eucharistic silver set from the 6th century, the Maestà del Maestro di Badia a Isola and a polychrome wooden crucifix of the 13th century. Among other works, the Madonna and Child by Segna di Bonaventura and the Madonna and Child with Saints by Pier Francesco Fiorentino.

Visit to the Archeological Museum Ranuccio Bianchi Bandinelli. The museum displays collections from Etruscan coming from the territory of Colle di Val d ‘Elsa and Monteriggioni. The most important finds are represented by the set of the late-orientalizing period tomb of Campiglia dei Foci, known as Tomba Pierini, and the reconstruction of an Etruscan girl’s face, buried 2,500 years ago in a tomb around the area of Le Porciglia.

This tour may also be combined with tours of San Gimignano or Certaldo. 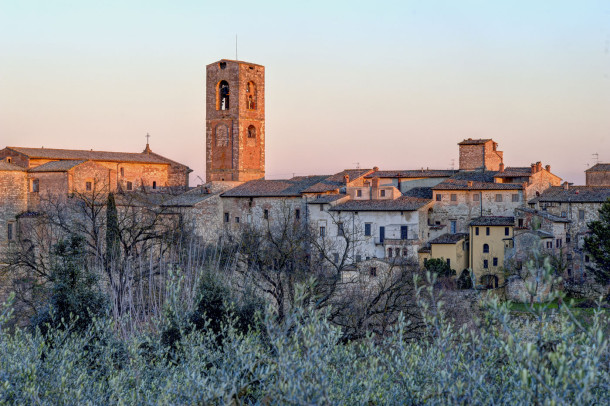 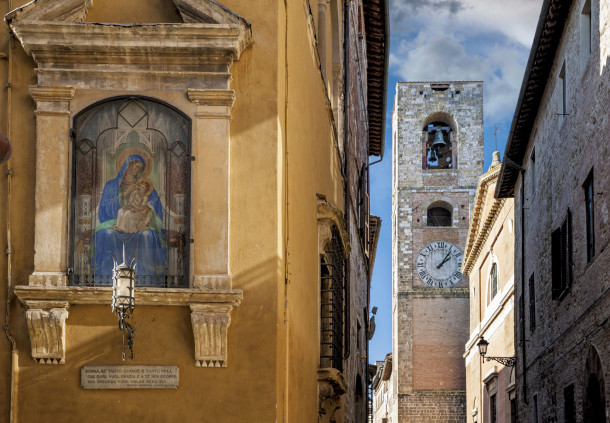 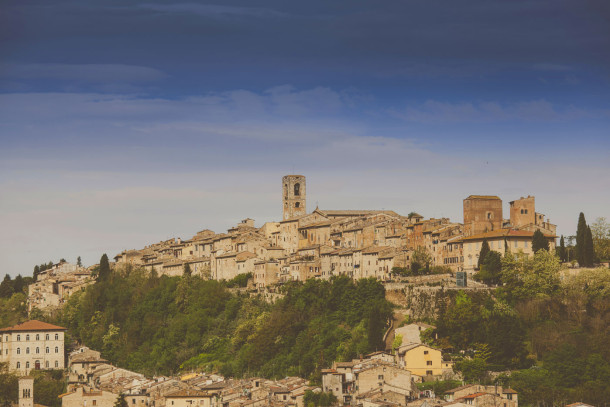 A guided tour to discover the history and the breathtaking landscapes of one of the most beautiful medieval villages of Tuscany, birthplace of Boccaccio and an actual open-air museum.
Thanks to the combined ticket valid for all the town’s museums, you may include in the itinerary a visit to Boccaccio’s house, the Arte Sacra Museum and the entrance to the Palazzo dei Vicari, which houses the Tabernacle of the Executed by Benozzo Gozzoli.

May be also combined with the tour of San Gimignano or Colle Val d’Elsa, with a stop at Monteriggioni (maximum 6 hours) 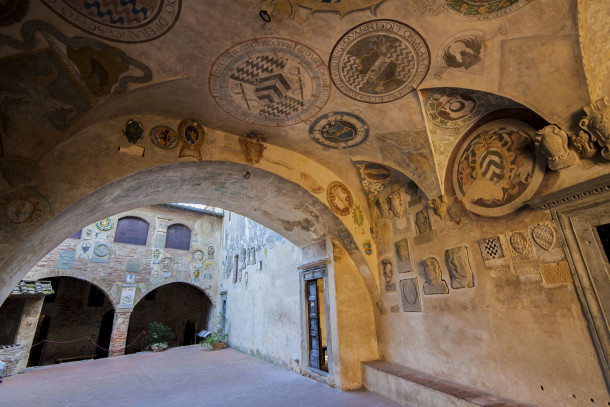 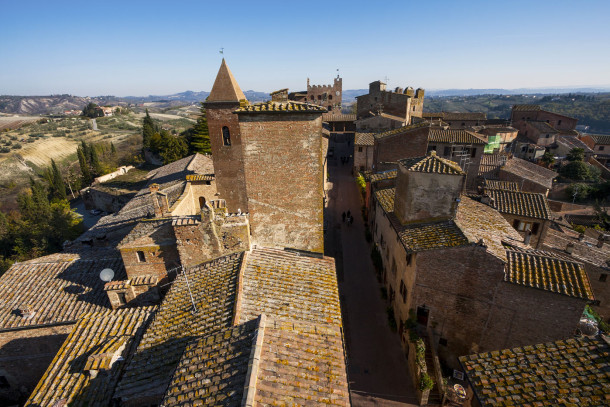